Since last week the new wesite of Italspawn has gone live. The growing proposals of the strains have been updated and a really nice movie of the company is added to get a quick view of the complete company.

Have a loot at: 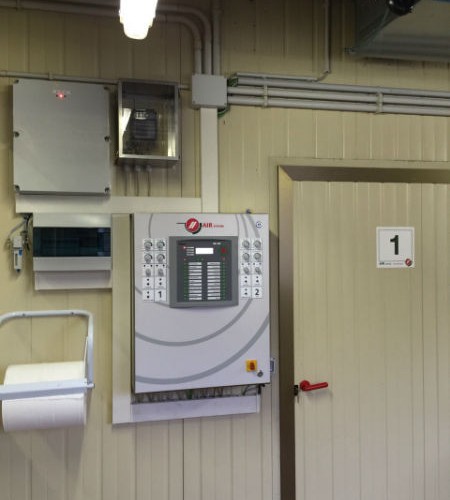 Last weekend the Provinzial Verband mushroom growers had the annual congress at Schmöning Pilze im Haltern am See. This is a small family company that grows mainly shiitake mushrooms and King oyster mushrooms. About 150kgs per week each. After the visit of the company all major spawn companies presented their latest news. Hollander Spawn and Italspawn presented the renewal of the production process of the FB29 that causes the strain to be much more stable and continues high producing. Also the good results of the performance of the F599 on the German “one layer” system mushroom farms  is promising. Because of the high ceilings , it is quite difficult to create a good microclimate in the casing soil. With other strains this causes high yield in the first flush and low yield in the second. The F599 is less susceptible for this phenomenon and produces more even over the both flushes.

The last months Italspawn has built a new test facility which has now reached a state of the art status since the recent implementation of a proper computer controlled air conditioning unit, new shelves and new cooling units which will allow us to test our strains in a more similar environment to a real phase 3 compost mushroom farm. 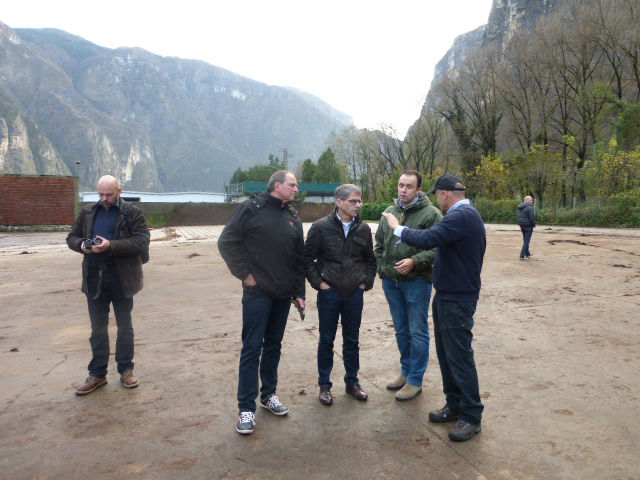 One of the last weeks of 2014 the Management crew of Dohme Pilzzucht (regular customer of Hollander Spawn BV) lead by Mr. Gerard van de Wijdeven made a practical excursion to Italy. Italspawn was very happy to take in the professional Mushroom people from Dohme Pilzzucht to show them the spawn plant in the hills of Montebelluna. Many discussions were held about the production and maintaining the good quality of the spawn. Beside spawn there was a visit to the compost yard of Funghi Val Brenta.  Mr. Busnardo proudly showed  his company and good conversations about the difficulties of compost making were held. 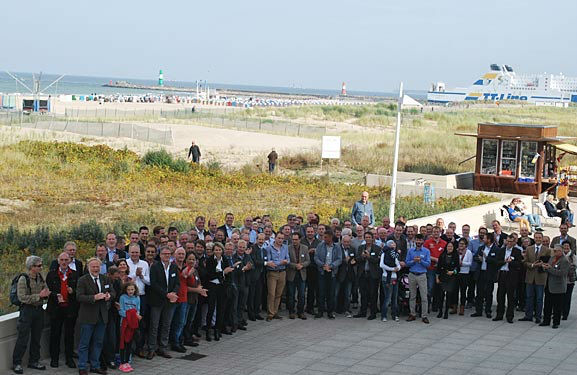 In the beginning of October the BDC jahres tagung was held in Rostock. Several lectures were held. Michael Legrand was updating us all about the consumtion of mushrooms in Germany. Further there was a lecture about releasing positive bacteria into the casingsoil to degrease the amount of wet bulbs in case of an infection. Also the way of packaging mushrooms in the future was a topic and this is still very difficult it turned out.

the nice picture off all the participants was made by Christiane James. 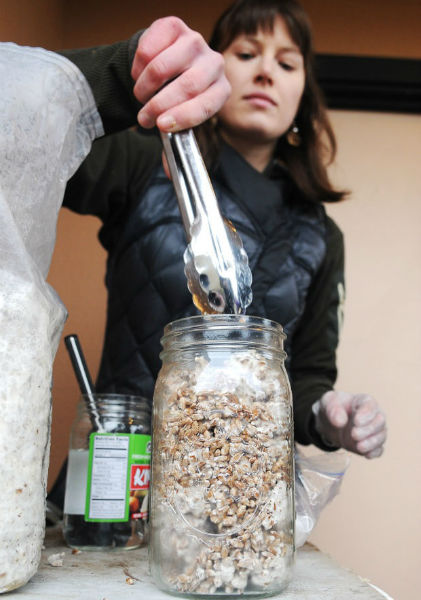 A local group is attempting to clean the waters in Corvallis’ Sequoia Creek using an unusual tool: mushrooms.
The process used by volunteers with the Ocean Blue Project, an ecological restoration nonprofit, is to place mushroom spawn and a mixture of coffee grounds and straw in burlap bags that mushrooms can grow in, and then place the bags so that water entering storm drains will filter through them. The technique is attempting to take advantage of the natural ability of mycelium — the underground part of fungi — to break down toxins like oil and pesticides and metabolize harmful bacteria like E. coli.
Ocean Blue Project volunteers placed their first test bag, containing yellow oyster mushroom spawn, in a drainage chute near the Ninth Street Coffee Culture on Sunday.
The Washington Environmental Council has been using similar techniques in parts of the Puget Sound region, and a unrelated study from the state has shown fungi helped remove fecal coliform bacteria from flowing water.

According to Arterbury, the technique could potentially be a low-cost way to use biologic processes to reduce pollution in waterways. Coffee Culture donated burlap bags that carried coffee beans along with the used coffee grounds — all of which otherwise would have been thrown away. Arterbury said other food waste — possibly grain waste from local breweries — could be used to grow mushrooms.

Arterbury said the project has received positive support from the city of Corvallis. He said the biggest concern he’s heard is that people may eat mushrooms that have absorbed dangerous chemicals and heavy metals. Arterbury said since the mushrooms are grown in sacks they are not visible, but he will also hang signs warning people not to eat the mushrooms from the bags.

Rosalie Bienek, a biology instructor at Linn-Benton Community College and a board member at the Ocean Blue Project, brought the idea of using fungi as filters to Arterbury. She said she learned of the technique a year ago from a book called “Mycelium Running,” by Paul Stamets, who has also done a TED Talk on the subject.
“It’s got a lot of potential, and few people in the area are studying it,” said Bienek, whose research concentration is on botany and using native plants in restoration.
Bienek and Arterbury plan to place more of the bags along the creek, and if the water testing shows positive results they want to expand the use of mycofiltration to other areas along the Willamette River.

“If this has a great result we’re taking it everywhere,” said Arterbury.